You go to a restaurant. Order everything on the menu, because you don’t know what’s good. Taste everything. And pay only for what you like. Doesn’t sound reasonable, does it?

In the world of public tenders, especially for ambiguous topics, such as design, this appears to be common practice. Often these tenders expect participants to do a lot of the creative work, for free, just to see if the buyer likes it. “The tenderer submits a concept of the creative solution, which includes five creative examples and visualisations”, “the task of the test is to create a new design for an existing voter application” while “the payment for a fee [for the work] is not justified.” These are real quotes in response to payment queries held in the Public Procurement Register during the past few weeks. 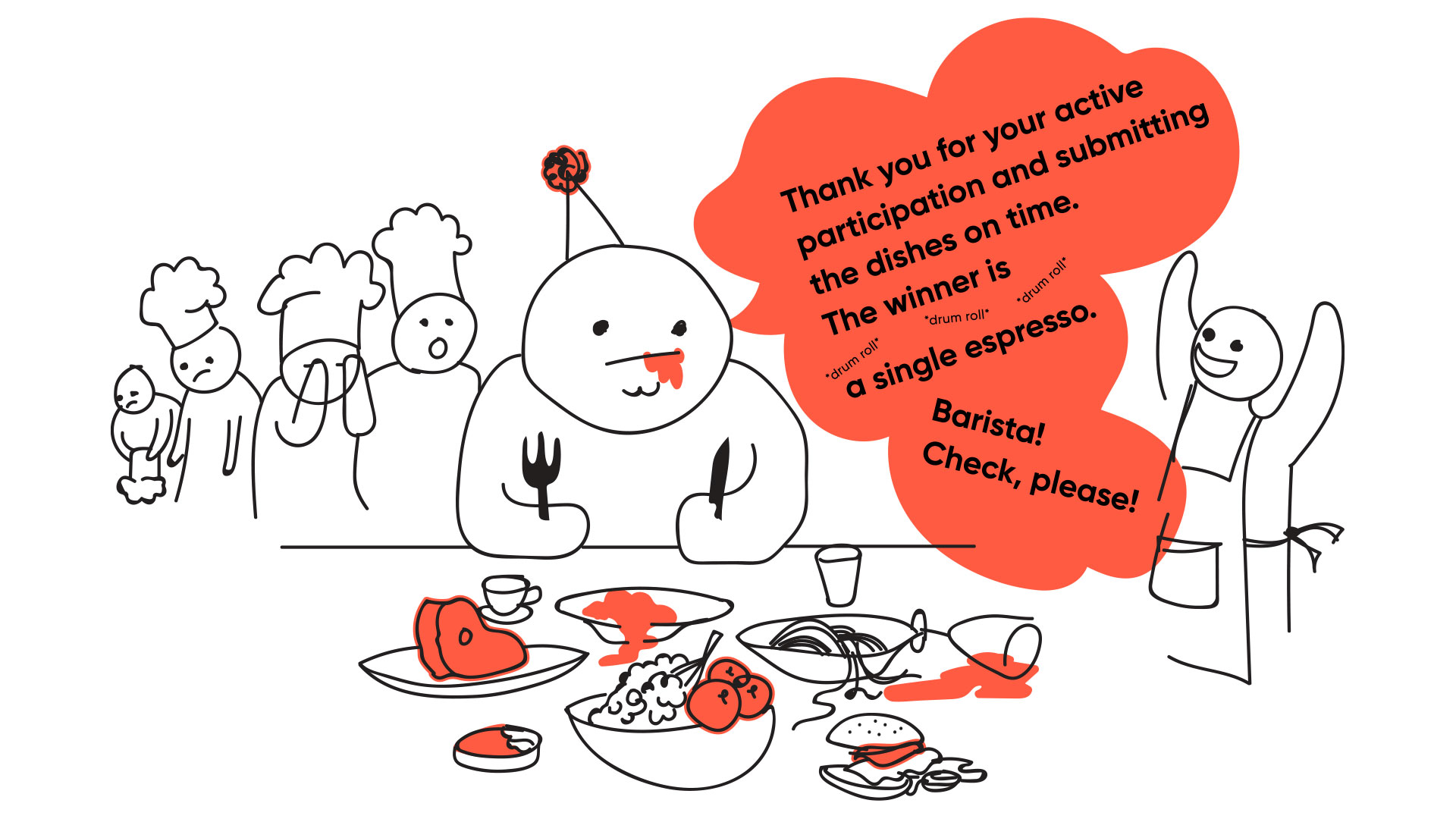 There are multiple reasons why this is wrong

Firstly, it is unethical. You cannot ask someone to do a job for free in the hope that, if you like it, you’ll pay them. In any case, all the other participants will be left with incurred costs and nothing to show for it. A lot of effort is just wasted. In the current crisis situation, where governments have promised to support companies and professionals, who because of the lock-down may not even be able to exercise their profession, asking for free spec work is plain cynical.

Secondly, there are no winners in this game. How can you compare the quality between paid and free work? Often, public procurements tend to be very bureaucratic and full of demands, that are neither negotiable nor very clear. The result is that participants are required to invest even more time to read between the lines and find additional information, to understand the actual needs and goals of the procurement. If this is unpaid work, the motivation to really get it right is limited.

Thirdly, the “let’s see what we like” approach to judging just the visualised drafts combined with the least expensive bid, often finally leads to a poor solution. What looks “wow” often doesn’t work very well and is a recipe for bad results. Designers will invest as little effort as possible to win the tender, not to do the work right. The customer will end up with a mediocre solution that was bought by ticking all the right boxes, but doesn’t compare at all to having done things the right way. At the end, everyone loses. The buyer loses. The tenderer loses. And the tax payer loses. Which is all of us.

However, complaining is easy so we decided to see, if we could fix this problem

During the Global Hack a small team from Brand Manual worked on a solution for this and created Tenderly. Tenderly helps procurers (whether they be public or private sector) to really think through the whole tender. With the support of helpful questions, they describe the actual problem to be solved and the context, in which it exists, the needs and pains of the target group and tangible deliverables they expect.

Based on this, Tenderly helps them set up the right requirements, the design team competencies they need to have for the project, relevant references of the team and the previous experience to look for. Tenderly also guides them through setting up the evaluation criteria so that they can have confidence in the results, that the best proposal wins and that the team behind it really can do the job. No more evaluations on price alone.

For the tenderers, Tenderly provides them a detailed design brief that includes relevant background and contextual information, describes the actual problem to be solved, the needs, pains and what they are expected to deliver, in the end. It helps them “tick the boxes” so that they know, whether they even qualify without making them do unnecessary spec work.

By making tenders transparent with the help of clear evaluation criteria, basing them on team competencies and methodology, Tenderly helps both procurers and tenderers get the right job done right. With fair compensation.

The reason most products are alike is that they are the first thing that came to someone’s mind.

Or in some cases the second or third thing, which is invariably still a variation on the theme of the first thing. This is why most cars look broadly alike, most ads on TV (if you still watch that kind of thing) feature a product and a price, and why all our smartphones are slick rectangular slabs.

Now, you might argue that this is because it is an established product (or service). That it is a standard and that deviating from that standard would make it unrecognisable for the customer and therefore a flop. Consequently, the logic goes, developing a product or service that in broad terms is exactly like that of the competitor, is a safe and brilliant idea. After all, why stick out in the market place?

Developing a new idea, one that is not just a variation on the same theme but really new, requires you to force yourself to iterate. To not stop when it is comfortable, but to keep going until you are in uncharted territory. This is hard, but rewarding.

It is called crazy 8’s and we’ve run this in all kinds of workshops with all kinds of people. Take a piece of paper, fold it three times in half and you end up with 8 rectangles. In the first draw and apple. In the second draw a completely different apple. In the third an apple that is different from the first and second one and so on. What this exercise clearly demonstrates is that everyone’s first apple is exactly the same. The second is a variation on the theme and so is the third one. By the fourth rectangle people are generally running out of good ideas of how to draw an apple and start clutching at straws. By drawing a pack of apple juice instead. And then the floodgates of ideas hit them as they realise, it is also possible to draw apple pies, apple trees, apples seeds, happy worms in apples, I love NY symbols and computer company logos.

The thing is, that not everyone can do this the first time. It requires you to be fairly comfortable thinking laterally about things, not just literally. Working in a group with critical colleagues, it requires real courage to zig when everyone else is only zagging. Within a real brainstorming session inside an organisation, when you have only two hours to come up with new ideas, where you have to be “creative”, it might just be impossible to stick your neck out with an abstract concept when everyone else is sticking to safe and proposing a new and better colour for the shoes, that will really make them stick out in the sneaker category.

Forcing yourself, and your organisation, to really iterate and develop a theme until it is only connected in thought to the initial concept, is difficult. However, as the crazy 8’s exercise clearly demonstrates, if you don’t iterate further, then all you’ll do is end up in exactly the same place as your competitors. Because they didn’t push ideas further either, and came up with the same variation of theme as you did.

Playing it safe is the least safe game you can play. While inside your organisation, it affords you the comfort of not sticking out, in the market place the safe play will disappear on the shelf with all the other safe bets. Consequently, since nothing is really sticking out and making a difference, a lot of effort and finances will be spent on advertising the same-old-same-old product in a new and creative but still safe manner of showing the product at a discounted price, making the only thing that is unique about the product how cheap it is.

Since cheap products cannot be really good products (or services), then you need to sell more and more, which drives consumption but in the end creates very little lasting value for anyone. Which will inevitably lead to another “product innovation workshop” where you have to be even more creative to come up with the next new exactly the same product as your competitor, but now in a nicer package.